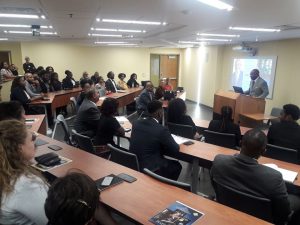 Willie Gary speaks to students at the University of Washington

Washington, D.C. – Trial attorney Willie E. Gary recently visited the campus of The University of Washington, D.C., David A Clarke School of Law (UDC) where he delivered a powerful keynote address on the topic of “Practicing Law, Promoting Justice and Changing Lives.”  Following his remarks, Gary engaged in a question and answer session with over 50 law students.  Gary addressed the lively audience of future lawyers and spoke about his journey through law school and how he was able to overcome the various obstacles he encountered as he worked to build his law practice.

The UDC law students were so engaged as Gary recounted stories as a young lawyer and they welcomed the opportunity to engage him in conversation.  Following the question and answer session, UDC and the Washington Bar Association hosted a reception in Mr. Gary’s honor.  Local lawyers, judges, public officials, university professors and members of the community applauded Gary and presented him with an Excellence in Leadership award for his commitment to justice and community service.  Hamid Saahir, UDC law student, made the presentation to Mr. Gary along with UDC Dean Renee McDonald Hutchins.
“Lawyers have a tremendous opportunity to bring about positive change in the lives of the underprivileged and downtrodden,” said Gary. “The responsibility to serve as a voice for the voiceless will ultimately rest on your shoulders, young people.  You are preparing to embark upon a career that can positively impact and make a change in one’s life – and you shouldn’t take this lightly,” commented Gary.
Trial Attorney Willie E. Gary Inspires Future Lawyers to “Work Hard and Be the Best”2019-09-232022-11-15https://www.garylawgroup.com/wp-content/uploads/2022/02/gary-logo-black-1.pngGary, Williams, Parenti, Watson & Gary, P.L.L.C.https://www.garylawgroup.com/wp-content/uploads/2019/09/weg-speaks.jpeg200px200px
Categories
Contact